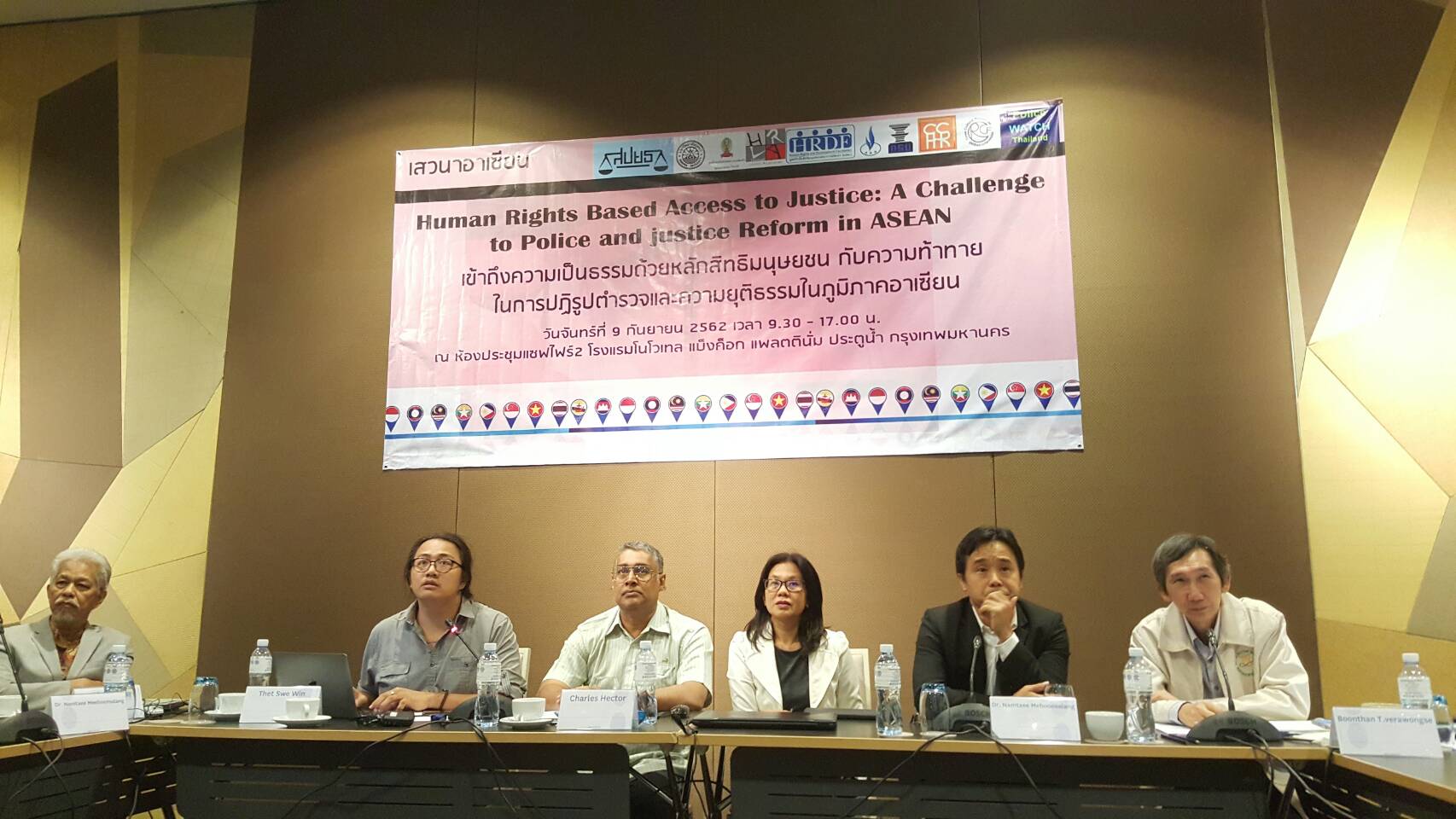 Seminar on Human Rights Based Access to Justice: A Challenge to Police and Justice Reform in ASEAN 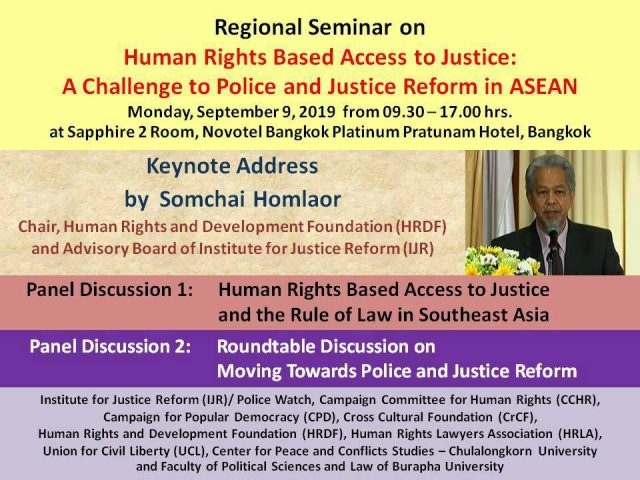 On 9 September 2019, from 9:30 am to 5:00 pm, the Institute for Justice Reform (IJR), together with eight other academic institutions and civil society organizations, jointly organized the Seminar Workshop on Human-Rights-Based Access to Justice: A Challenge to Police and Justice Reform in ASEAN at Novotel Bangkok Platinum Pratunam Hotel. Dr. Vichien Tansirikongkhon, Associate Professor of Institute for Justice Reform, led the workshop’s opening by giving his remarks to the participants from a wide range of occupational backgrounds including law enforcement officers, human rights activists, and diplomats.

Mr. Boonthan T. Verawongse, Secretary-General of the Campaign Committee for Human Rights (CCHR) and member of the Coordinating Committee for the IJR, then introduced the keynote speaker, Mr. Somchai Homlaor who is a renowned human rights defender in Thailand. His activism dated back during the period leading up to the student-led popular uprising against the military dictatorship of Field Marshal Thanom Kittikachorn on 14 October 1972. He is currently the Chairman of the Human Rights and Development Foundation (HRDF) and serves as an advisor to the Cross-Cultural Foundation and the Institute for Justice Reform. He was also the first Secretary-General of FORUM-ASIA.

Mr. Somchai Homlaor began his speech by sharing a personal anecdote. Twenty years ago, he and his friends started an initiative to invite human rights defenders across South-East Asia, especially East Timor which was going through a crucial political transition at the time, to Bangkok and provide a platform for them to discuss and exchange knowledge about their human rights situations. The Thai security sector, however, harassed and forced them to host the discussion in the outskirts of Bangkok. “I feel heavy-hearted as the history is now repeating itself as the same situation is recurring for the upcoming ASEAN People Forum,” said Mr. Somchai.

The Thai government’s unwillingness to commit to these international human rights principles results in several mass violations that were committed or continue to be committed in the country. Mr. Somchai gave some examples of such violations as follows: 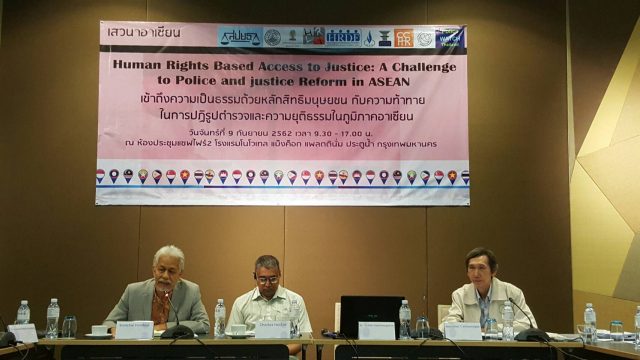 (1.) War on Drugs: During the War on Drugs in 2003, there was a saying “Drug offenders only have two options in their lives – they can either go to jail or to the temple (as a dead body to be cremated).” Only within three months, at least 2,500 died due to extrajudicial killings committed by state officers. Nevertheless, not a single perpetrator has been prosecuted.

(2.) The armed violence in the Southern Border Provinces (SBPs): After the 2004 gun robbery in Narathiwat province, the Thai military arrested some individuals suspected of being involved in the incident. A demonstration ensued in front of the Tak Bai district police station and the authorities cracked down on the protest, killing six protesters. Later, more than a thousand protesters were taken to an army camp in Pattani province by military trucks. 78 of them died during transportation due to suffocation. Shockingly, not a single government official involved in the crackdown faced any disciplinary or legal actions.

(3.) Enforced disappearance: Many human rights defenders (HRDs) in Thailand have been subjected to enforced disappearance because of their human rights work. This includes the case of Mr. Somchai Neelapaijit, a human rights lawyer who filed a lawsuit against the Thai military for allegedly torturing national security suspects, and the case of Billy Porlajee Rakchongcharoen, a prominent indigenous Karen activist in Kaeng Krachan National Park who has recently been found brutally murdered inside the premise of Kaeng Krachan National Park. In these cases, no perpetrator has been brought to justice.

(4.) Torture and ill-treatment: Although Thailand is a State party to the CAT, there have been more than a hundred reports of torture against suspects in national security matters inside military camps in the SBPs. Thailand does not have a domestic law criminalizing torture, but there are legal provisions in the Criminal Code, such as the prohibition of arbitrary detention (Article 310), which may be used to prosecute the torturers. Still, again, not a single perpetrator has faced disciplinary actions or criminal lawsuits.

Furthermore, many victims of torture fall victim to judicial harassments for speaking out about their experiences. Instead of being plaintiffs who bring a lawsuit against the state official who committed torture, they became defendants for allegedly filing a ‘false’ police report or committing libel.

(5.) Transnational migrants: There are more than 2,500,000 – 3,000,000 transnational migrants in Thailand. Most of them are subjected to hazardous working conditions. When they try to speak out and call for justice, their employers used the law as a weapon to silence them. This tactic of suppression of freedom is called Strategic Lawsuit Against Public Participation (SLAPP).

(6.) SLAPP: Similar to the situation of transnational migrants, many HRDs in Thailand have been subjected to SLAPP for speaking out about injustices and human rights abuses. Years ago, the Internal Security Operations Center (ISOC) Region 4 has filed charges against Mr. Somchai, as well as Director of the Cross-Cultural Foundation Ms. Pornpen Khongkachonkiet and Director of Duay Jai Group Ms. Anchana Heemmina under the criminal defamation law and the Computer Crime Act for publishing stories about torture allegations in the SBPs. Although the charges against these three HRDs had been dropped, many State agencies and businesses are still pursuing such charges against other HRDs. The SLAPP tactics aimed at exhausting their time, resources, and energy. Indigenous people, impoverished forest residents, and other marginalized groups are even more vulnerable to falling prey to this ‘justice system.’

“We are all working hard. But our problem is we keep going around in a circle. We continue to do our work in the same way without thinking about the bigger picture and try to envision a new approach to reform our justice system,” stated Mr. Somchai. He observed that HRDs tend to place too much emphasis on their thematic area of work or specific cases, thereby ignoring the importance of upholding the principle of human rights and democracy and neglecting the larger goal of transforming our social structure of inequalities. In his experiences, he learned that some Thai labor union may not support the rights of transnational migrants and some human rights activists may still support the death penalty and torture, believing that they are effective means of preventing crimes.

“We need to have a wider perspective to fix the entire system,” Mr. Somchai said, “Now is high time we start expanding such a perspective. Human rights violations do not happen only in Thailand but across the region of Southeast Asia. This workshop is a good opportunity to learn from the experiences of one another, especially for issues that cross our borders.” He then ended his remarks by asking the participants to keep in mind four key crucial principles for ensuring the sustainability of human rights and justice in our region as follows:

In every case of human rights violations, no matter how big the scale of violation is, we need an objective process of seeking truths about what happened. Without truth, it is impossible to find solutions for the problems.

Often, States direct their attention, resources, and energy on searching for and punishing perpetrators. They often forget that victims of human rights violations should be the center of our work and, therefore, leave them unheard. Most of these victims need reparations- be it in the forms of financial compensation, psychosocial treatments and services, and state apologies- to feel like justice has been served.

The culture of impunity remains strong in Thai society. Prosecuting the perpetrators of human rights violations is a way of sending a message to the victims and the public that justice is serving them.

None of the above principles would matter without institutional reform. We need to change the ways our State institutions operate. Start now by reforming the curricula of military training and law schools, by promulgating laws that criminalize torture and enforced disappearance, and by mainstreaming the ideas of human rights into the outlook of law enforcement officers.

Without this process, we will continue to go around in a circle without achieving anything.

Panel discussion: Human Rights Based Access to Justice and the Rule of Law in Southeast Asia

After Mr. Somchai Homlaor delivered the opening remarks, the panel discussion on “Human Rights Based Access to Justice and the Rule of Law in Southeast Asia” followed. The panel featured panelists from many countries across Southeast Asia including Thailand, Malaysia, Myanmar, and the Philippines. 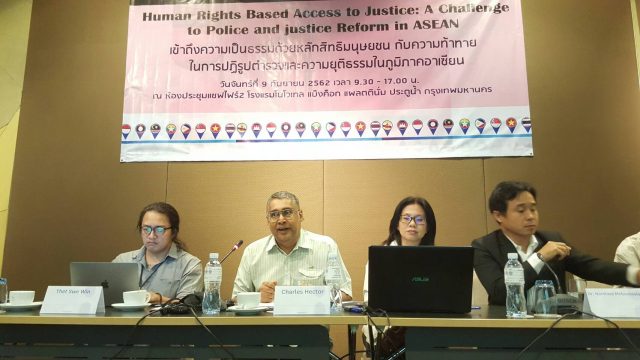 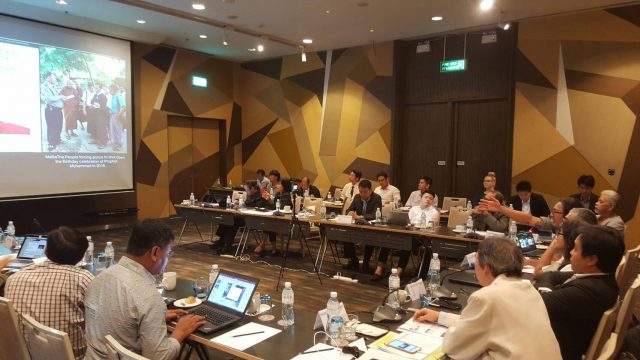 – The rule of law could mean several things.

Prosecutors must ensure that there is sufficient evidence to provide a realistic prospect of conviction against each suspect on each charge. This is on the basis that indictment should only proceed when we are very sure that the person is guilty. If not, it will be a mere waste of state resources

Punishment should be proportionate and not determined by confessions or information obtained from tortured individuals. 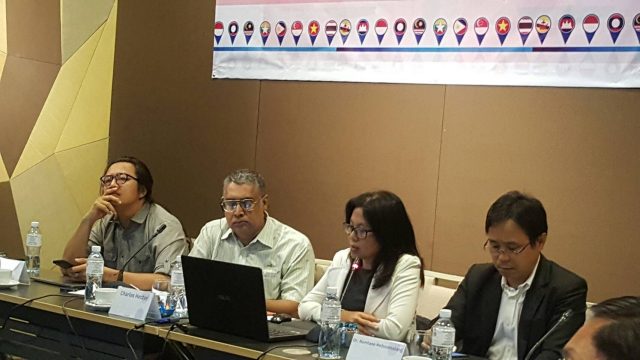 Comments made by other members:

largely on freedom of expression. She is also an advisor for the EU in Myanmar since 2016.

o ASEAN, 30% are young regions- to not forget the role of young people in

reform, also make sure to approach young police to change mindsets and

o In relation to Myanmar, justice is being delayed, the right to justice in one ASEAN country could spread to justice throughout, and one countries struggle is a struggle for all

can have a confession can be used against them in the court of law, defence

can use prosecutor cannot, naked searches of women and inquests into death

o Within 24 hrs of arrest, the person must be brought before magistrates, was a problem where police would apply for 14 days of remand, new law limits it to

no more than 4 days on first application of remand

o Judges- Judges at the high court, court of appeal and federal court were appointed by the King acting on the advice of the Prime Minister- need a separate body to appoint, also ‘security of tenure’ and ‘judges on probation’

o Lawyers have a duty to society and not focused monetarily. Training young

lawyers to understand this concept

o Government retaliation on the Malaysian Bar, only lawyers serving 7 years or below cannot serve on the bar

Comments by other panelists-

In Thailand lawyers can be banned for speaking up about human rights. But this is not applicable in Malaysia, however they can be prevented from becoming judges. Some current judges and Attorney General in Malaysia have loudly voiced their concerns of human rights

Victim of human rights abuse, her husband was disappeared.