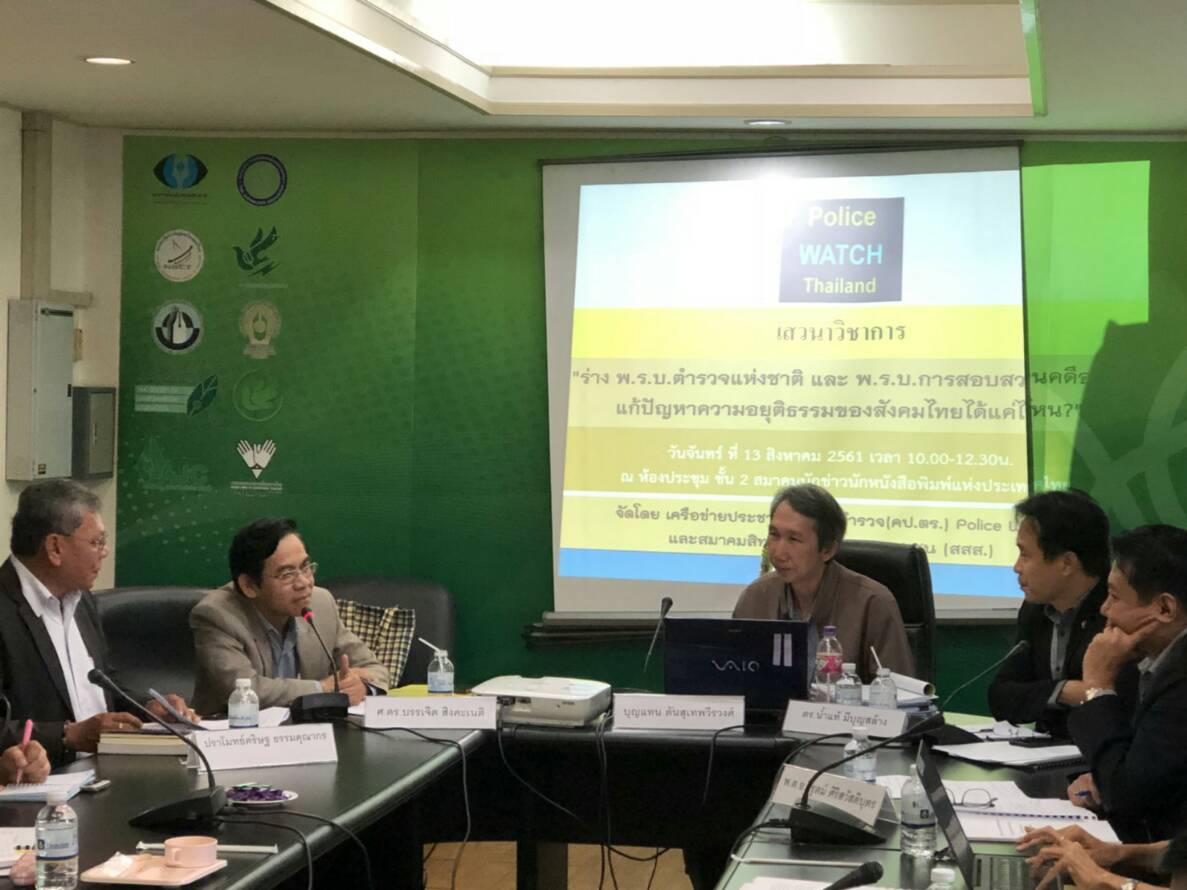 Mandated by the Constitution B.E. 2560 (2017), the National Committee on Justice Reform (Police) which was chaired General Boonsrang Niampradit concluded the guidelines for the police reform and revealed on Wednesday 28 March 2018 at the National Defense Academy. The 18-page summary report of the Committee’s operation had been submitted to the Prime Minister and the chief of the National Council for Peace and Order (NCPO), General Prayuth Chan-o-cha. The People’s Alliance for Police Reform (Police Watch) and its partners view that the report and recommendations of the Committee was not responsive to the need of people and society as a whole. The recommendations are attempting only to increase the power of the police but reduce the power of the people rather than promoting access to justice. The recommendations also failed to address the structural change but centralizing power and resources. Besides, there is no clear distribution of human resources to the provincial, local or station level but more accumulate at the regional level. This centralization of power, and the long line of command, hierarchical structure, non- professional, community disconnection, no check and balance system, neglecting effective people participation, no respect on Human Rights and equality . Therefore, Police Watch concludes that the recommendation of the National Committee submitted to the Prime Minister is a vague, invalid and quite superficial. There will not be able to resolve the problems or bring about any positive changes accordingly to ensure justice for all the people and society as a whole.

Police Watch and the partners view the National Committee’s recommendations as follow:

1. Human Resources: Recruitment and Appointment of the Police Commissioner General will be under the authority of Police Commission (Chaired by the current Police Chief or Police Commissioner General) instead of the (previously) National Police Policy Board (NPPB) (Chaired by the Prime Minister) as recommended by the National Committee on Justice Reform (Police). The elected Prime Minister should have legitimate authority to consider and appoint such Police leadership. There is little progress such as the qualification for considering such appointment of staff at various levels. Actually, that is the internal

and administrative arrangement of the police agency to ensure justice for all as usual. However, it is not a reform at all,

Nevertheless, an effective Administrative Reform needs to decentralize the power and resources to provincial level. Taking into account, structural reform must be carry out boost the Provincial Police as pointed out by the Prime Minister recently on May 23, 2017. However, the Provincial Governors, as the key persons who are in charge on various affairs, must be mandated to appoint, assign or allocate such police personnel’s especially on the provincial police commander and other lower rank officers after the approval of the Provincial Committee or Provincial Police Affairs Committee. The line of command must be shortened and be more efficient.

Police Watch views that the Provincial Police Region (1 – 9) (actually it is now functioning as the Regional Police Command Office) are not functioning very well and they must be disbanded to safe the cost of more than 7 billion Baht a year. Immediately, there will be other 5,000 police forces available to be allocated in response to the need of 1,480 police stations throughout the country.

Regarding the Independence Police Complaints Committee (IPCC), Police Watch views this as a good idea but practically it is still problematic, weak and not impartiality. The Independence Committee must be absolutely “Independent” from various influences particularly it should not be under the National Police Commission (NPC) led by the Police Chief. Composition of this Independence Committee is not appropriate. However, as the National Committee on Justice Reform (Police) recommended that board members, secretary and deputy of this Independence Police Complaint Committee and its support staff are from the Police Inspector General Office (of the National Police Office) who might be seen to have conflict of interest. This might not be independence from influential factors especially from their superior officials. This is directly affecting the consideration and the judgment based on clear evidence, fair and justice for all.

2. Duty, Authority and Mandates: So far, there is no progress action in response to the cabinet resolution on September B.E. 2558 (2015) which endorsed the recommendations of the National Reform Council (NRC). The NRC recommended that 11 units currently under police responsibility (including the tasks, human resources, budget and equipments) be transferred to the respective or relevant ministries or agencies. This is in order to reduce the police burden, and share responsibility to other agencies. So that the Police forces should be able to focus on the main function such as the law enforcement, crime investigation and ensure efficiency in its operation. There was a question whether those agencies are ready to handle the tasks. However, it is the main duty of the government to be accountable and

operate within a certain time frame. Nevertheless, this is also in line with the National Police Act B.E.

2547 (2003) which was in place since 14 years ago but no progress had been made.
3. Law Enforcement and Crime Investigation System: Recommendation on Investigation system is drawing back to the previous arrangement before the (problematic) National Council for Peace and order (NCPO) Order 7/2559 (2016). The Order dissolved such arrangement on the positions and affecting professionalism of the investigation officers which brought about consequence problems. There is no guarantee that such investigation will be conducted fairly, professionally, and to act legally without any interference, harassment, or intimidation. Quite often that such appointment or disciplinary punishment by the police superior had been used to threaten the investigation officers. If they denied to distort the evidence. As the matter of fact, many police station chiefs are not so qualified, knowledgeable or capable on crime investigation. Some (and many) of them taken a short-cut by jumping up thru through illegal means and gained support from the criminal. This is definitely affecting crime investigation. Such “verbal order” always used by the superior commanders and that led to the abuse of investigation. Citing some examples, filing the case against innocents without proper evidence; destroying the evidence or crime scene investigation to cease the cases, etc. These always happened if the public prosecutor was not able to check, control and monitoring the investigation closely. This must be in line with international standard. For example, the current case here of “30 million Baht Lotto dispute” and other cases also reflected the failure of professional crime investigation and miscarriage of justice. These problems always brought about the painful experiences of the innocent victims. Most of them are the ordinary

In summary, the recommendation of the National Justice Reform Committee (Police) didn’t touch upon the Independent Investigation system called by the majority of investigation officers and general public. If Interrogation is fair and independent, the investigation will then become more effective and reliable. However, the chief of investigators are the key persons to handle the problem accordingly.

Actually, Police Reform should be one of the key national policies. It is the main responsibility of the Prime Minister Prayuth Chan-o-cha to aware of these problems. The government needs to address and resolve these critical problems in a comprehensive manner especially on

Moreover, the government should pay more attention on Structural Reform and Crime Investigation System Reform in response to the needs of the society. This also aims to maintain the people trust on justice system which is so important.

Police Watch and its 102 partner organizations reiterate the proposed 8-points Police Reform which had been already submitted to the Prime Minister since October 5, 2017. We call on the Government to consider our concern seriously and ensure that the meaningful implementation can be taken as follow: